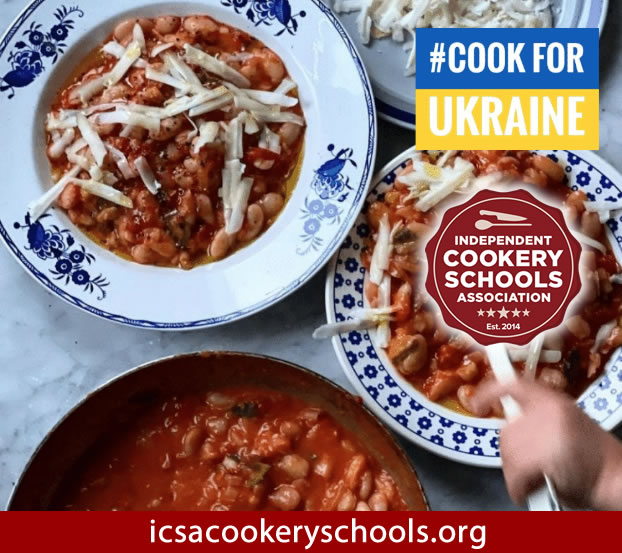 As Russia invaded Ukraine, the world watched on with, initially, horror. Devastation that this could be happening, pain at the horrific imagery rolling in and deep, distressing empathy for the people affected. It didn’t take long, however, for that horror to turn into action, especially where the food industry is concerned.

This is largely thanks to chef and author Olia Hercules, a Ukrainian living in the UK. With most of her family still based in Ukraine, and many sleepless nights being spent waiting to hear if they had survived until morning, Hercules took to Instagram with astounding courage to spread the message. What began as an appeal for help turned into a considered, constructive effort: #CookforUkraine.
image.

The initiative is wide-ranging, encouraging everything from restaurants getting involved to everyday people cooking a Ukrainian recipe and donating in exchange. Hercules, her close friend and food writer Alissa Timoshkina and CB had the fundraiser up and running on Just Giving in a couple of days. The hospitality industry, is offering everything from a £1 donation on each bill, to special Ukrainian dishes where all proceeds will be donated to the cause.

ICSA Cookery School members are generating a range of activities including hosting special cook-along suppers, adding Ukrainian dishes to their lessons and adding optional donations to their courses.

ICSA member Nick Morris, owner Station House Cookery School in Kirkcudbright, West Scotland, who worked for over 20 years in Ukraine as a teacher and still has many friends and colleagues based there, many who are now fighting, commented  “Ukraine was my home for 20 years. I was welcomed unconditionally and with the greatest warmth by the Ukrainian people. My friends and former colleagues have now had to take up arms against Russia whose barbaric invasion is based upon nothing but lies and lunacy. It’s a heart breaking situation and words may sound hollow, but I want all Ukrainians to know that I am with you and your bravery is an inspiration to the world. Slava Ukraini. Glory to Ukraine.”  Contact Nick for Ukrainian recipe ideas and insights into Ukrainian culture. Email Nick Here

If you want to cook and get involved directly, recipes linked on the JustGiving page include Olia Hercules’ recipe for green borsch and stuffed cabbage leaves and Timoshkina’s recipe for Solyanka fish soup. It is both a celebration of Ukrainian cuisine and culture and a defiant recognition of this country’s autonomy.

For those more inclined to going out, restaurants are coming in thick and fast with offers of help. Look for #CookforUkraine initiatives on social media, including activity by our cookery school members on Instagram here or our Facebook page here

We’d love you to share your involvement on social media by adding the hashtag #CookForUkraine and tagging @cookforukraine in your posts.